Photo Gallery -- Vetiver and Rehabilitation of road side quarrying

The following photos are taken in the municipality of Shenzhen (a large south China city adjacent to Hong Kong). Xia Hanping of the South China Institute of Botany is the scientist who has developed a vetiver program with local entrepreneurs, and who provides the latter with techical help.

In thie Shenzhen areathere has been very rapid growth of infrastructure and many roads have not been protected, In addition there are vast road side quarries that are both an eyesore and a source of major sediment flows.

Madam Xu, a lansdcaper from Guanzhou who attended last year Nanchang Vetiver Workshop, was awarded contract to stabilize some quarries. She was so succesful that she has now received additional contracts. Photo 2 China - Shenzhen. Because of its steepness and instability the slope wwas first sandbagged on the contour Photo 3 China - Shenzhen. Vetiver hedgerows were then planted on the contour betwen the sandbagged contours 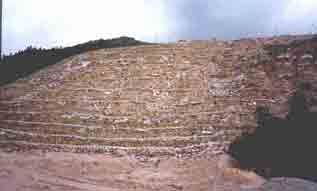 Photo 5 China - Shenzhen. A few week after planting vetiver has been seen to have "taken".

Photo 5 China - Shenzhen. Close up of vetiver inter planted with trees and shrubs Photo 6 China - Shenzhen. preparation of slope prior to vetiver planting 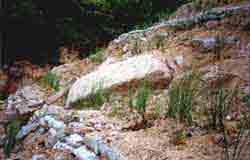 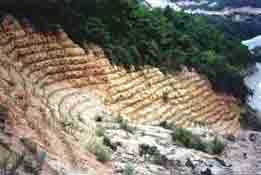