To be presented at the Second International Vetiver Conference -- Thailand, January 2000

I. Trapping Agrochemicals and Nutrients in Agricultural Lands.

There has been an increased discussion in Australia recently about water quality in streams and rivers. Particular concerns are expressed about the likelihood of high levels of nutrient causing blue green algae blooms in inland rivers and pesticides in runoff causing fish kills in coastal rivers.

Research in both Australia, and the U.S. has shown that soil erosion is the main factor contributing to the pollution of water.

Australian research has demonstrated that high nutrient levels in water are associated with high sediment load particularly during flood flow. In recent floods it was estimated that 3.4M tonnes of soil were transported to the ocean from the Fitzroy River catchment in central Queensland (Wylie, 1996).

In the U.S. a long-term research project in Tennessee, which involved the monitoring of nutrient loads, herbicides and insecticides showed that:

Vetiver Grass Technology (VGT) has been shown to be very effective in trapping both fine and coarse sediment in runoff water from both agricultural and industrial lands (Meyer et al, 1995 and Truong et al, 1996, Truong, 1999). In addition, vetiver grass has a very high level of tolerance to extremely adverse conditions including heavy metal toxicity. Therefore VGT, when appropriately applied can be a very effective and low cost means of reducing particle-bound nutrients and agrochemicals in runoff water from agricultural lands.

This paper presents the research results on the effectiveness of VGT in trapping nutrients, herbicides and insecticides in runoff from two major agricultural industries in Australia - sugar cane and cotton.

Soil loss due to water erosion is one of the major causes of soil fertility and productivity decline in agricultural lands particularly on sloping lands. Sediment and runoff analyses associated with the monitoring the quality of water in the Johnstone River catchment, tropical Queensland, have indicated that, in general, greater than 95% of the nitrogen and phosphorus lost in the runoff are associated with the particulate fraction (Hunter et al, 1996). The absolute nutrient losses in soluble form are negligible. The key to controlling off-site nutrient movement in runoff is therefore to control sediment movement. If the sediment can be effectively trapped, at source, the degree of downstream pollution will be greatly reduced.

The experimental site was located on a sodic duplex soil, which is one of the major and significant soil types being used for sugar production in the Mackay district of Queensland. This soil has sodic and dispersive subsoil with a powdery surface. Due to these characteristics, traditional soil conservation measures such as contour banks are very unstable and require major maintenance effort.

Due to the instability of the collecting ponds and inadequate samples, analyses of agrochemicals could not be carried out. Analytical results for nutrients are shown in Table 1.

From the above results it can be seen that vetiver hedges were highly effective in trapping predominantly particulate-bound nutrients such as P and Ca. As expected, the hedges had little effect on nutrients, which predominantly occur in soluble form such as N and K. In the case of P, the reduction ranged from 26% for zero till, burnt trash blanket treatment to 67% for rotary hoe and 69% for zero till green trash blanket. Similarly the largest amount of Ca trapped by the vetiver hedges was in the rotary hoed treatments and when fertilisers were applied on the surface.

The effectiveness of vetiver hedges varied with soil surface treatment and fertiliser placement, being most effective under rotary hoed surface (67% reduction for P and 51% for Ca), and when fertilisers were applied on the top of the trash (69% for P and 56% for Ca). Therefore, under plant cane conditions, where the soil surface is rotary hoed, with no ground cover and subsurface fertiliser placement, 67% of P and 51% of Ca applied could be retained on site if vetiver hedges were established along drainage lines.

Similarly under green cane harvest trash blanket conditions, vetiver hedges will trap 69% of P when fertilisers are applied on the top of the trash blanket.

Cotton industry funded research in Australia in 1993-1996 has identified key transport mechanisms in particular sediment in moving pesticides and nutrients off cotton fields. High-risk periods include early season and soon after chemical application. Techniques, which reduce off site movement of sediment, will similarly reduce concentrations of sediment bound pesticides (such as endosulfan) and nutrients in runoff waters from irrigation and rainfall.

In recent years as most farmers have installed tailwater dams to collect the first significant run-off, however run-off from cotton farms is still of concern, particularly if endosulfan is used soon after irrigation and or during wet weather when run-off is most likely. Where on farm storage has been installed, a second problem faced by growers in the Emerald Irrigation Area in Central Queensland (EIA) is the rapid build up of silt in farm storage and sumps.

Trapping of sediment contained in irrigation and rainfall runoff close to the source would reduce the risk of off-site movement of pollutants significantly.

A pilot study was set up to quantify and assess the effectiveness of vetiver in reducing sediment, nutrients and pesticide movement from cotton production systems.

Vetiver hedges were planted in strategic locations at the end of tail drains in single and multiple rows on several farms in the EIA in September 1997. Plants and soil samples were collected and analysed for suspended sediment, nutrient and pesticide concentrations at the end of the cotton season in February 1998. Samples were collected up and down slope of the hedges. Similar sampling was carried out after the following season.

Soil samples collected at various distances upstream and downstream from the vetiver hedges and analysed for selected organochlorine (a , b and sulfate endosulfan) and organophosphate (chlorpyrifos, parathion and profenofos) (Table 2).

Table 2: Herbicides and pesticides analyses from soil samples collected upstream and downstream of a vetiver hedge planted in a taildrain of a cotton farm in central Queensland.

These initial findings indicate that vetiver grass appears to be highly effective at trapping the sediment bound chemicals: endosulfan and chlopyrifos, two of the more commonly used pesticides. 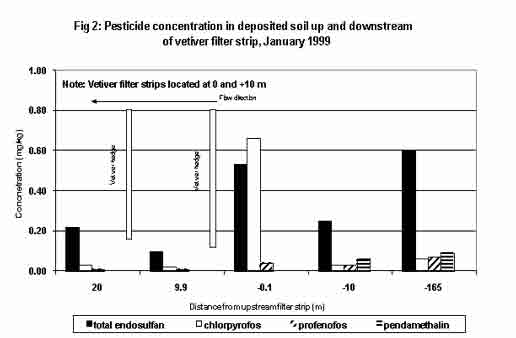 Soil samples were also analysed for herbicides which include diuron, trifluralin, prometryn and fluometuron. 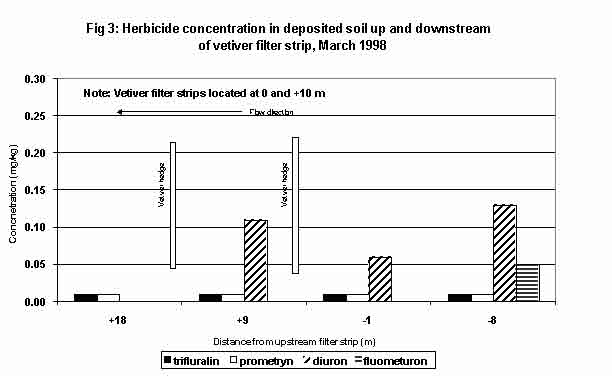 Fig 3 shows that during its first year growth, vetiver hedges were not very effective in trapping diuron, but fluometuron levels were greatly reduced. In the second year the vetiver hedge trapped 48% of diuron (Fig 4) 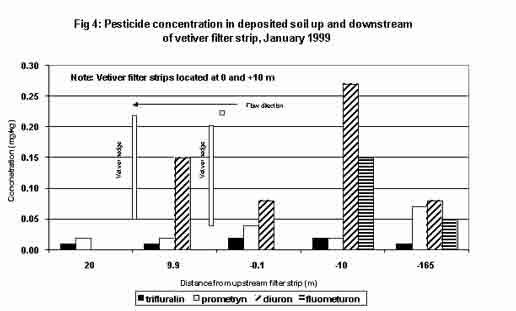 The high concentration of endosulfan in the trapped sediment resulted in higher endosulfan content in vetiver tops. While the vetiver shoot of the first hedge contained on average 0.43 mg/kg endosulfan, the shoots of the next hedge down slope only have 0.03 mg/kg. That is a 14 times reduction.

The same soil samples were also analysed for major plant nutrients. Results of major nutrient analyses for the second year are presented in Table 3.

Similar to the results obtained in canelands (Table 1) a significant amount of nutrients were trapped by the vetiver hedges. During the second year 73% of N in sediment was trapped as compared with 52% for P and 55% for S.

Results of these studies conducted to determine the effectiveness of vetiver grass in reducing pollutant transport from sugarcane and cotton farming systems are encouraging.

In cotton farming, vetiver grass hedges have proven to be an effective vegetative filter to reduce sediment bound pollutants such as endosulfan and phosphorus.

Although pesticides and herbicides levels were not determined in the sugarcane trial, similar results to those from the cotton trial can be expected with these agrochemicals, as a very high proportion of P and Ca was trapped by the hedges. Further detailed studies to fully quantify the effectiveness of the grass through time are required.

Preliminary findings indicate that vetiver grass has the potential to offer sugar cane and cotton farmers an additional simple management practice which will reduce soil movement off-site and at the same time reduce the risk of off-site pollution by agrochemicals and nutrients.