As a big city, Guangzhou produces 4200 tons of rubbish (household and commercial trash) each day. All of the rubbish was buried in specified valley sites. As usual two dams were constructed across the valley with nearby earth or semi-weathered rocks, and then the rubbish was transported, filled, and pressed into the deep valley between the two dams. When the rubbish reached few meters high earth was brought in order to cover the whole rubbish ground, and then plastic sheets were used to cover the whole surface. Pipes were also buried so that bio-gas produced by rubbish could be emitted. When the valley was fully filled with rubbish the two dams would be raised so that it could hold more rubbish. As a result the dams are usually several dozens meters high and contain several stages, which should stand high pressure caused by both large amount of rubbish and the pressure of heavy machinery working at the ground. Besides, the big dams should be re-vegetated which would not only green up the rubbish site but also improve the environment and relief worry of nearby residents.

However, it is not easy for plants to grow there, because the serious polluted water could almost kill all of the plants. Some landfills have ponds constructed to collect and treat polluted water, but others may not have such facilities, which would cause new environmental problem to the nearby villages.

The Datianshan Landfill was established in 1985, located in Huangpu District of Guangzhou City. It is a super-large rubbish fill land in southern China with an area of 347 Mu (15 Mu = 1 hectare). It deals with rubbish for 2500t each day. The dams are 75 m high now, which contains 5 stages, 15 m higher than the original design. The dam is over 100 m long and 15 m width on the top of the dam. The two dams were constructed with semi-weathered sand stone and was always subject to collapsing. Although ditches were prepared to lead polluted water into the pond for treatment, there was still large amount of polluted water emitted through the dams, which killed plants including some native wild plants. To protect the dams and green up the slopes, some kind of grasses were planted. Unfortunately they failed to grow up or even to survive. Under the support of city government vetiver grass was introduced through public bidding and planted in November 2000. It took 20 days for the planting on the outside slopes of two dams. Through 7 month's growth the grass reaches over 2 m high and the dams were completely covered and protected. Besides, due to high evaporation of the vetiver the amount of polluted water reduced dramatically and some of the ditches were dried.

During the investigation, we found that vetiver grew quite well. It can even stand in the extremely polluted rusty water. On the contrary, neither native plants nor planted grass were survived. The huge demonstration showed that vetiver is an excellent plant for rubbish ground re-vegetation, slope stabilization, and environment protection. Now the rubbish ground is full, the landfill's surface will be covered by soil and then vetiver grass will be planted to quickly re-vegetate the whole upper surface. 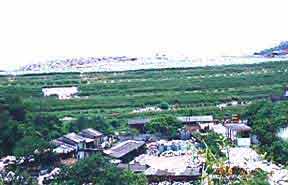 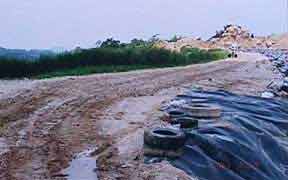 A. (left) The over view of the vetiver protected landfill (1). Landfill slope protected by vetiver (landfill workshop at base of "dam"/retaining wall)

B. (B right) The over view of the landfill (2): the slope of the "dam" (retaining wall) covered by vetiver (left), rubbish covered by plastic sheet (right), the top of one the "dam" (middle). 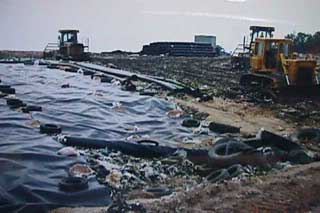 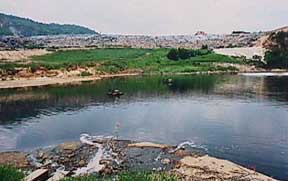 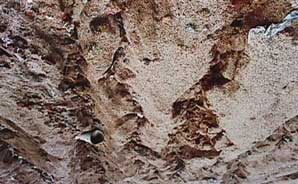 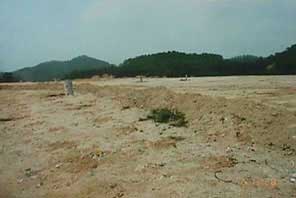 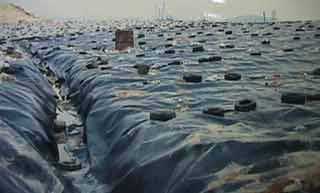 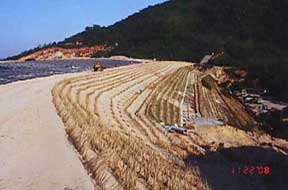 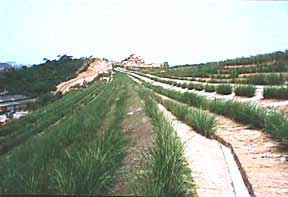 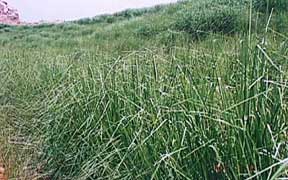 R. The results were so good that the site became a public demonstration. V. The vetiver nursery that supplied bare rooted plants for the project