To be presented at the Second International Vetiver Conference -- Thailand, January 2000

Herbicides applied to farmlands are important for controlling weeds in crops but this practice, if not properly managed, can lead to serious off-site contamination of the surrounding environment. In particular, residues of these chemicals can adversely affect flora and fauna in downstream aquatic ecosystems.

Natural and constructed wetlands have been shown to be effective in reducing the amounts of some agricultural contaminants in runoff. This study was undertaken to assess the potential for using vetiver (Vetiver zizanioides) and three other species in constructed wetlands receiving agricultural runoff containing herbicide residues. An initial step was to determine the sensitivity of these plant species to residues of two commonly used herbicides, atrazine and diuron. This paper focuses on results for vetiver.

A glasshouse trial was conducted to determine the effects of varying concentrations of atrazine and diuron on the growth of vetiver in a simulated wetland environment. Sixty-four to 65 days after planting, the vetiver plants were exposed to either atrazine or diuron at concentrations of 0, 20, 200 or 2,000 m g L-1 in the free water. Effects on growth were measured for 28-30 days after herbicide application. Growth parameters measured included water use, cumulative leaf area, chlorophyll fluorescence and whole plant dry weight at harvest.

Results showed that growth of vetiver was not adversely affected by application of atrazine or diuron at rates up to 2,000 m g L-1. By contrast, growth in Phragmites australis was significantly reduced at the highest rate of application of both herbicides. Not only does vetiver establish and grow well under wetland conditions; it is also able to tolerate relatively high levels of atrazine and diuron.

The use of pesticides is essential for maintaining the productivity of many farming systems. Herbicides are more widely used than other types of pesticides (Leonard 1990), in part due to the increased use of herbicides in reduced till cultivation. However, a concern in many intensive agricultural areas is the amount of pesticides, particularly herbicides, contained in runoff from farming lands and their potential for causing adverse impacts on aquatic ecosystems downstream (Hunter 1992, ANZECC & ARMCANZ 1999).

The amount of pesticide present at the time of a runoff event is directly related to the amount applied, the time since application and the degradation of the pesticide in soil, foliage and stubble (Finlayson and Silburn 1996). Herbicides vary widely in their chemical properties and are transported in runoff from farm paddocks by a variety of means including as undissolved particles (soil solution containing herbicides), dissolved in humic material, or absorbed onto eroded soil particles and organic matter (Willis and McDowell 1982).

The herbicides atrazine and diuron are widely used to control grasses and broadleaf weeds in a variety of cropping systems in Australia. Both herbicides act by inhibiting photosynthesis in target species (Tomlin 1997). Atrazine is relatively mobile and can persist for several months in freshwater environments. Diuron is less mobile than atrazine but can persist for several months in soils and sediments (ANZECC & ARMCANZ 1999). Several Australian monitoring studies have reported the presence of atrazine and diuron residues in surface water bodies, often at concentrations <1 m g L-1, but occasionally at higher concentrations (Hunter et al. 1999, ANZECC & ARMCANZ 1999, Noble et al. 1997). Moreover, concentrations of atrazine up to 600 m g L-1 and diuron up to 400 m g L-1, have been measured on occasions in farm runoff, where storms have occurred soon after herbicide applications (B.W. Simpson, personal communication).

Atrazine has been shown to inhibit algal growth and photosynthesis at concentrations less than 1 m g L-1 (Spawn et al. 1997). Recently released guidelines for the protection of aquatic ecosystems in Australia and New Zealand (ANZECC & ARMCANZ 1999) recommend that concentrations of atrazine should not exceed 0.5 m g L-1 in freshwater systems, while (as an interim measure), concentrations of diuron should be <0.03 m g L-1.

The ability of aquatic macrophytes to filter contaminants from water is a key feature in the design of constructed wetland systems, which are increasingly being used to improve water quality (e.g., Kadlec and Hey 1994, Sainty and Beharrel 1998). For example, Schoenoplectus validus can reduce biological oxygen demand, nitrogen (N) and phosphorus (P) in wastewater (Tanner 1994), while Typha spp. has been shown to enhance the removal of heavy metals (zinc, lead, silver) and salts from underground mine drainage water in northern Australia (Noller et al. 1994).

Vetiver (Vetiver zizanioides) is an extremely hardy grass species with a number of characteristics that make it ideal for use in environmental protection measures such as vegetative buffer strips (Truong et al. 1996, Truong 1999). Past research has found that within 3 to 4 weeks after planting, vetiver can remove 82% of total N and 99% of P from sewage polluted river water (ChunRong et al. 1997). This present study explored the potential for expanding the application of vetiver grass technology for use (as a vegetative buffer or in shallow wetlands) in the treatment of runoff and other wastewaters containing damaging concentrations of herbicide residues. The specific objective of the study was to quantify the effects of atrazine and diuron applications on the growth of vetiver in a simulated wetland environment.

A preliminary trial was conducted over 29 days to develop a method to establish a wetland environment under ‘pot’ conditions and to select suitable wetland species for the main trial. Species trialed were Iris pseudacorus, Typha spp, Schoenoplectus validus, Phragmites australis and Vetiveria zizanioides. The number of new shoots that developed within the trial period was used to indicate plant vigour. 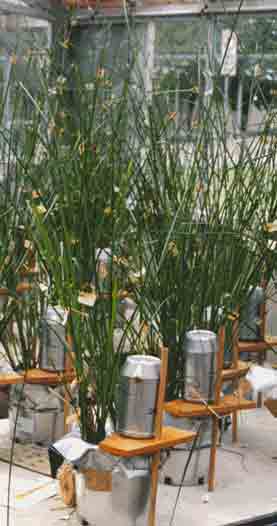 nutrient solution were held in wooden stands. Two rates of nutrient application were compared, a low rate of 1 g L-1 Aquasol and a high rate of 2 g L-1 Aquasol. The Aquasol formulation is given in table 1.

For the main experiment, a completely randomised block design was used with 3 replicates and 4 rates each for atrazine and diuron:

The following measurements were made during the experimental period: -

Variances of the data were determined (ANOVA) and means were compared using protected least squares difference (LSD) for each time of measurement or sampling.

All plants grew well and produced new shoots during the 29 days of the preliminary trial (table 1). The initiation of new shoot growth implied that root development was also occurring to support new growth.

Table 1: The effect of nutrient rate on the total number of new shoots developed from preliminary trial wetland species.

The high rate of nutrient supply showed no adverse effects on plant growth and was selected for use in the main experiment.

Water use by vetiver grass was not affected by exposure to either diuron or atrazine at concentrations up to 2000 m g L-1. Results for diuron are shown in figure 1. Total water use in all treatments 92-94 days after planting (28-30 days after herbicide application) was approximately 12 litres per pot. 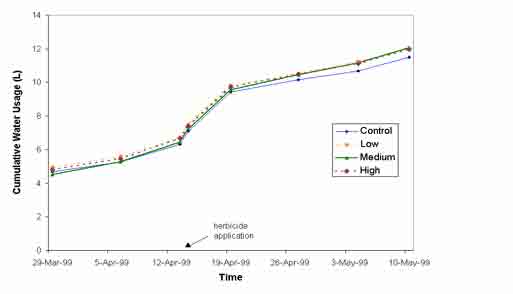 Cumulative leaf area of vetiver grass did not significantly respond to herbicide application, even at the highest rate (2000 m g L-1) of either atrazine or diuron. Figure 2 shows growth response of vetiver throughout the trial (before and after atrazine application). Similar results were obtained for diuron (data not shown). 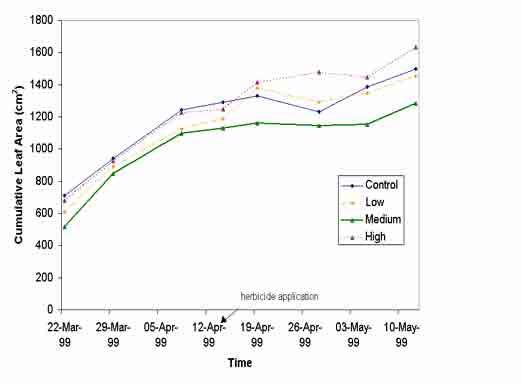 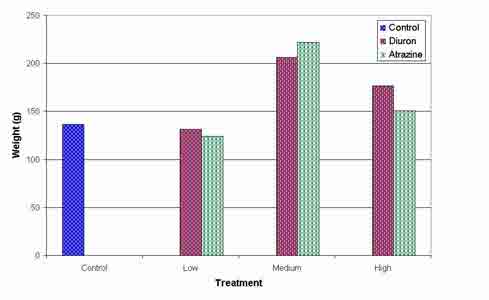 Figure 3: Mean effect of 3 levels of atrazine and diuron on the whole plant dry weight of vetiver at harvest, NS (P<0.05). 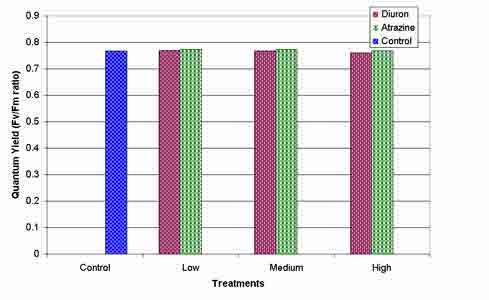 4.6 Comparison with other Species

To demonstrate vetiver’s herbicide tolerance a comparison was made with the performance of Phragmites australis, another wetland grass species, grown under the same conditions. For each species, whole plant dry weights at the high rate of both herbicides were expressed as a percentage of respective dry weights of the control (figure 5). While growth of vetiver was unaffected by either atrazine or diuron at 2000 m g L-1, both herbicides reduced growth of Phragmites australis to less than 40% of the control. 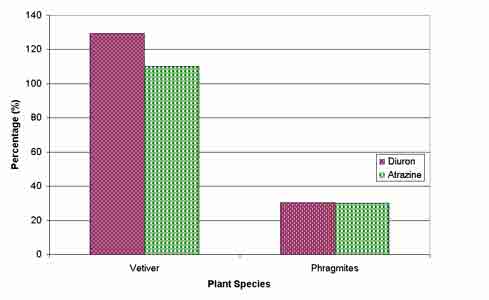 Figure 5: Comparison of mean whole plant dry weights of vetiver and phragmites at the high rates of herbicide application, when expressed as a percentage of dry weights of respective controls.

Results of this experiment confirmed the ability of vetiver to establish and grow well in a shallow wetland environment. Importantly, the results also clearly demonstrated that growth and performance of vetiver were not affected by exposure to the herbicides, atrazine and diuron, at concentrations likely to be found in agricultural runoff or water bodies downstream. Indeed, vetiver was shown to be unaffected by either herbicide at concentrations as high as 2,000 m g L-1; levels which are likely to be encountered in the environment only in situations of accidental spillage, or direct application to waterways. Vetiver’s tolerance towards the two herbicides was demonstrated in terms of both growth (water use, cumulative leaf area and dry weight) and photosynthetic activity (PAM fluorometry).

The use of wetlands for the removal of pollutants involves a complex variety of biological processes, involving microbiological transformations and physio-chemical processes such as adsorption, precipitation or sedimentation (Dunabin and Bowmer 1992, Ansola et al. 1995, Brown et al. 1998, McKinlay and Kasperek 1999). The ability of vetiver to tolerate flooded soil conditions makes it very suitable for use in ephemeral or permanent wetlands. Its dense stands of stiff, erect stems can reduce flow velocity, increase detention time and enhance deposition of sediment and sediment-bound contaminants (e.g., heavy metals and some pesticide residues). Furthermore, vetiver’s dense, finely structured root system can improve bed stability and nutrient uptake, and provide an environment that stimulates microbiological processes in the rhizosphere. Use of the sterile or low fertility genotype of V. zizanioides (Truong 1999) should minimise its potential for becoming an aquatic weed.

Results of this study indicate that vetiver is unlikely to be adversely affected by runoff containing residues of atrazine or diuron.

Further research is needed to determine the mechanism underlying vetiver’s tolerance to these herbicides, and indicate the extent to which residues are (i) absorbed by the roots; and (ii) translocated to the shoots. Further research is also required to evaluate the effects of longer-term (chronic) exposure of vetiver to atrazine and diuron.

We acknowledge Myriam Raymond, John Baisden, Bernard Hicks and Andrew Loadsman for their valuable help during the glasshouse experiment. Thanks to Stew Cannon for the motivation and valuable time. We also wish to acknowledge Phil Hargreaves and Lesley Ruddle for supplying the herbicide and for their help in herbicide adsorption and degradation testing.

Dunbabin, J.S. and Bowmer, K.H. (1992). Potential use of constructed wetlands for treatment of industrial wastewaters containing metals. Science of the Total Environment, 111, 151-168.

Finlayson, B. and Silburn, M. (1996). Soil, nutrients and pesticide movements from different land use practices, and subsequent transport by rivers and streams. In Downstream Effects of Land Use, H.M. Hunter, A.G. Eyles and G.E. Rayment (eds), pp. 129-140. (Department of Natural Resources, Queensland, Australia).

Willis, G.H. and McDowell, L.L. (1982). Pesticides in agricultural runoff and their effects on downstream water quality. Environmental Toxicology and Chemistry, 1, 267-279.